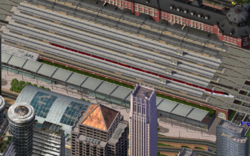 A bullet train leaving a station.
File:Bullet Train.jpg
The bullet train in motion compared to other rapid transit networks.
File:Screen07mk5.jpg
A look at the bullet train download screen when the mod could be downloaded.

The Bullet Train Mod is a modification to the monorail created by APTX.

Also included is a realistic Slope Mod that dramatically decreases the angle of the network's slope, making it very realistic but restrictive (this mod is optional)